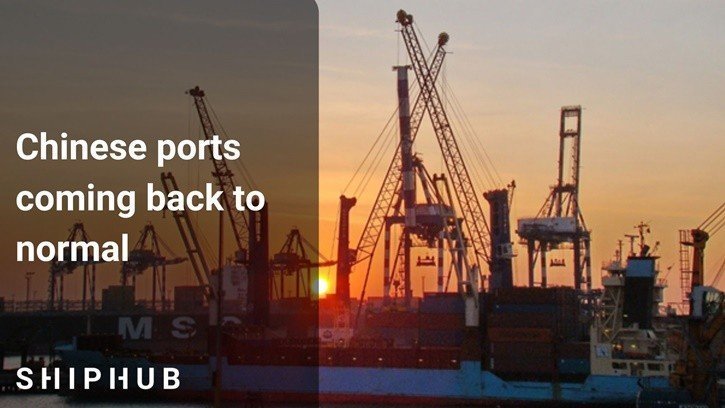 Although the case fatality rate of COVID-19 in China is the highest in the world, the number of new cases in this enormous country is dropping day by day. This fact brings ease of mind for many, especially for those who do business with China, as it means, for example, fewer issues when it comes to importing goods. Fortunately, it has been reported that major ocean container lines and Chinese ports are returning to normal in most locations.

Chinese ports coming back to normal

After being hit by the Coronavirus outbreak, Chinese ports pick up the pace. Ports are starting to operate as usual, though it differs from region to region. CMA-CGM said that in North China, employees work in split groups, either from home or at the site. Employees in Wuhan and Yichang, which are in the epicenter of the disease, continue to work from home. The same goes for APL employees.

The container traffic at ports is getting less congested, and major coastal ports are operating at normal productivity levels. ONE stated that its China operation had returned to business as usual, though not in Wuhan yet. Nevertheless, it accepts booking to/from all ports in Hubei province, as well as Wuhan.

Even though the ports are coming back to normal operations, some of the sailings are still being canceled. The measure has been taken as a consequence of expected low demand in the market. For example, the Pacific China Central 1 (PCC1), with a rotation of Ningbo – Shanghai – Long Beach – Pusan – Ningbo, sailing on March 28 will be voided, as well as Pacific China South 2 (PCS2), with a port rotation of Taipei – Xiamen – Shekou – Yantian – Los Angeles – Oakland – Taipei, on March 23 and April 20. Blanked sailings undoubtedly impact port operation in other countries. Since there are not as many as usual ships to make port calls, port operators are made to reduce working hours.