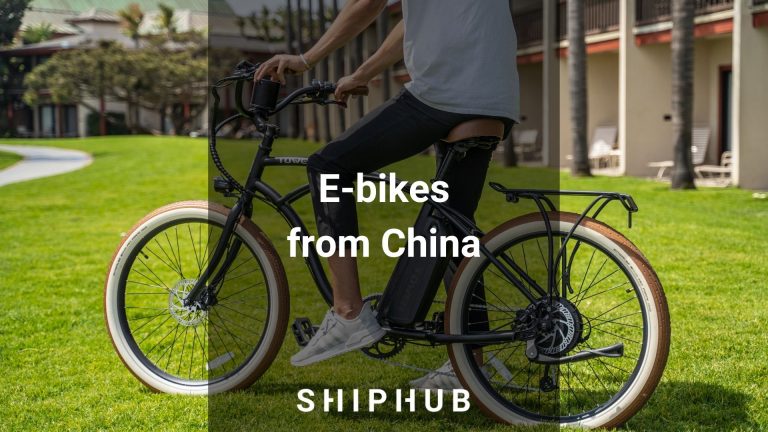 Electric bikes are getting increasingly popular as a means of transport. Some cyclists refer to their electric bike as a “second car.” Riding a bicycle is one of the methods of tackling climate change. No wonder e-bikes are the most purchased electric vehicle. China is the largest e-bike market. How to import electric bikes from China to the EU and the US?

Where are electric bikes manufactured in China?

Importing electric bikes to the EU

Duty rates in the EU

Import tariffs apply to all imported goods into the European Union, meaning those shipped from a third country. The EU’s TARIC system is used to find duty rates for specific product groups identified by CN codes.

A few years ago, it was revealed that many Chinese electric bicycle producers in China received subsidies to lower the price of their products in overseas markets. Such a proceeding was detrimental to European e-bike manufacturers. The European Union imposed anti-dumping duties on some Chinese e-bike producers as high as 79% to protect their businesses. These measures will expire on 19 January 2024.

Importing electric bikes from China to the EU – responsibilities

Every importer’s responsibility is to ensure that imported products comply with the requirements of the target market. The European Union implemented regulations, directives, and other legal acts for various products to ensure that products sold in the EU are safe for the consumer and the environment.

Requirements for electric bicycles in the extended single market of the European Economic Area (EEA) are quite complicated. If you are planning to import electric bikes from China to the European Union, make sure that the manufacturer carried out the conformity assessment, set up the technical file, issued the EU declaration of conformity, and affixed the CE marking to a product in accordance with the directives below.

Requirements for electric bikes on the EU market

If you import bicycles, whether with a motor or without, the product must comply with the Regulation (EC) No 1907/2006, the REACH Regulation. This Regulation ensures a high level of protection of human health and the environment as well as the free movement of substances, on their own, in mixtures and in articles, while enhancing competitiveness and innovation. This Regulation also promotes the development of alternative methods for the assessment of hazards of substances.

2. CE mark and declaration of conformity

Unlike non-motorized bicycles, electric bicycles must bear the CE mark. Therefore, the importer is obliged to ensure that the technical file comprises detailed documentation on the construction of the machinery, including drawings of the machinery and its parts, test results, a description of protective measures, a declaration of conformity, and other elements. The CE is affixed based on:

Electric bicycles are also subject to the Directive 2012/19/EU on waste electrical and electronic equipment (WEEE). Its purpose is to preserve, protect and improve the quality of the environment, protect human health, and utilize natural resources prudently and rationally. The WEEE Directive aims to prevent WEEE and reduce the disposal of waste and contribute to the efficient use of resources and the retrieval of valuable secondary raw materials. EEE is placed on the market with a symbol – a crossed-out wheelie bin with (after August 2005) or without (before August 2005) a single bar.

Importing electronic bikes from China to the US

Customs duty in the US

The US customs tariff system is based on HTS (Harmonized Tariff Schedule) codes, which classify products into individual groups. Enter the article’s name or code in the search bar in the system to find the duty rate. The general customs tariff of cycles fitted with an electric motor for propulsion of an output not exceeding 250 W (HTS code 8711.60.00.50) is 0%, but products from China under this code are subject to an additional duty of 25%.

Requirements in the US

According to US law, low-speed electric bicycles are classified as consumer products; therefore, e-bikes fall under the Consumer Product Safety Commission (CPSC) jurisdiction. A low-speed electric bicycle means a two- or three-wheeled vehicle with fully operable pedals and an electric motor of less than 750 watts (1 h.p.), whose maximum speed on a paved level surface, when powered solely by such a motor while ridden by an operator who weighs 170 pounds, is less than 20 mph. A bicycle shall have an instruction manual attached to its frame or included with the packaged unit. Other requirements for bicycles can be found on the ECFR website.

Compared with other countries, the United States has the most relaxed regulations and restrictions on electric bicycles. Bear in mind that the US’s definitions and classifications of electric bicycles vary from state to state.

Taking part in trade shows in China is a great opportunity to learn about the latest industry news, check the quality of products on site and network. The Chinese value face-to-face communication to build stronger interpersonal relationships. This is a list of some trade fairs in China:

Phase 1 of one of the largest trade fairs, Canton Fair (200,000 participants), is focused on electrical appliances and equipment. Exhibitors present electric bicycles and their parts.

For over two decades, CHINA CYCLE has been a platform connecting manufacturers and buyers of bicycles with and without attached motor or engine, bicycle parts, and accessories.

ISPO Shanghai is a trade fair with segments: running, water sports, outdoor, health and fitness, as well as manufacturers and suppliers in the industry.

China Sport Show is the largest trade fair in the sports industry in the region. During the trade fair, forums, seminars, and business meetings are organized for over 100,000 participants.

Electric bikes – to sum up