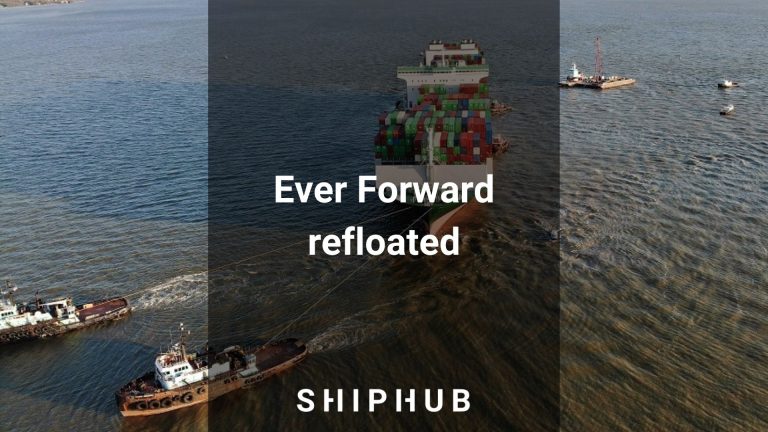 Ever Forward, a ship of Taiwan shipowner Evergreen, ran aground in the Chesapeake Bay on March 13. The container ship Ever Forward was refloated after a few weeks when the conditions were most favorable, with the help of a full moon and a high spring tide.

The Ever Forward container ship, over 300-meter-long carrying almost 5,000 containers on board, ran aground after leaving Baltimore for Norfolk, Virginia. For weeks, the refloating attempts were unsuccessful.

After less than four weeks, it was decided to conduct a costly operation of removing containers from the ship. More than 500 containers were removed in a week thanks to rescue experts who climbed onto container piles to unhook boxes and attach them to cranes on floating pontoons. As a result, the ship was easier to move. After 35 days of running aground, with the help of six tugs and two barges, the third refloating attempt was successful. Thus, Ever Forward returned to the waterway.

The ship was towed to Annapolis Anchorage Grounds for inspection. After the inspection, Ever Forward returned to the Port of Baltimore (Seagirt Terminal) to reload the removed containers. The ship is scheduled for the voyage to the port of Norfolk.

Whether it was a human error or mechanical failure is yet to be determined.

The aftermath of Ever Forward grounding

What are the financial repercussions after the Ever Forward went aground for more than a month? After two unsuccessful attempts to refloat the ship, Evergreen declared a general average for the vessel and the cargo.

Average is in maritime law, damage, or loss, less than the total, to maritime property (a ship/its cargo) caused by the perils of the sea. A general average is borne in common by the owners of all the property engaged in the venture. It is formally independent of marine insurance.

The State of Maryland asked Evergreen to set up a $100 million “responsibility fund” to pay for the economic and environmental costs related to the grounding of Ever Forward.

The grounding of Ever Forward reminded the general public of the situation from the previous year. In March 2021 another Evergreen ship, Ever Given, blocked the Suez Canal for six days, disrupting the global supply chain.