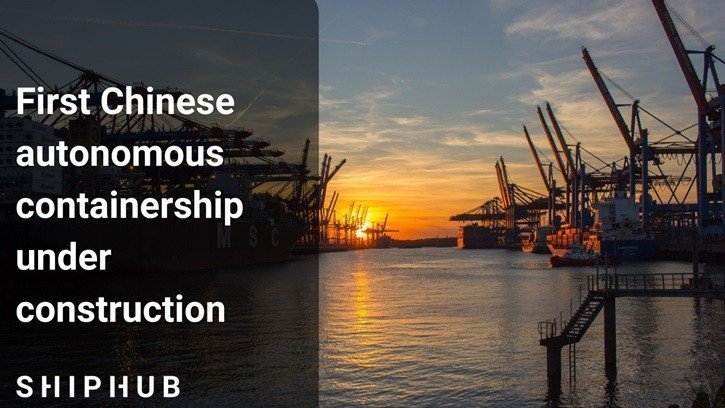 Zhi Fei – Flying Wisdom – is the name of the first autonomous containership being constructed in China. The construction was launched with a steel cutting ceremony held in mid-May at the Qingdao Shipyard.

Autonomous container ships (MASS) are seaborne vessels that transport cargo with little or no human interaction. In 2019, several autonomous cargo ship projects were in development. One of these container ships, the Norwegian Yara Birkeland, is still under construction. A 120 TEU container ship is expected to begin operations in 2020 at the earliest.

The 300 TEU feeder vessel Zhi Fei was specially constructed to have less impact on the environment. It is equipped with systems that reduce SOx, NOx, and CO2 emissions, as well as noise. The ship, 117 meters long and 15 meters wide, will have the capacity to sail at a maximum of 12 knots.

In addition, the containership will be the first in China with an independently developed intelligent navigation system installed. The ship is scheduled for completion in June 2021. Then, the testing phase of the Zhi Fei will begin.

The construction of an autonomous container ship is part of China’s economic development strategy to ensure the country’s high position in the innovative shipbuilding industry.

Autonomous container ships are the future of the maritime industry. It is expected that they will be safer and cheaper to use for shipping lines. Also, the vessels will be lighter and thus more environmentally friendly. It is also believed that the pirates will not as frequently target such ships as the traditional ones.

This solution is not without drawbacks. Some of the systems used onboard are complicated, and the crew is needed for regular maintenance works. There are also no relevant legal regulations, e.g. when another ship sends a request for rescue. It is also uncertain who is liable for damage caused to another vessel in the event of a collision. However, the most serious challenge is maintaining cybersecurity. Intelligent systems and collected data are vulnerable to cyber-attacks and manipulation. Those are the challenges that constructors of autonomous container ships have to overcome.