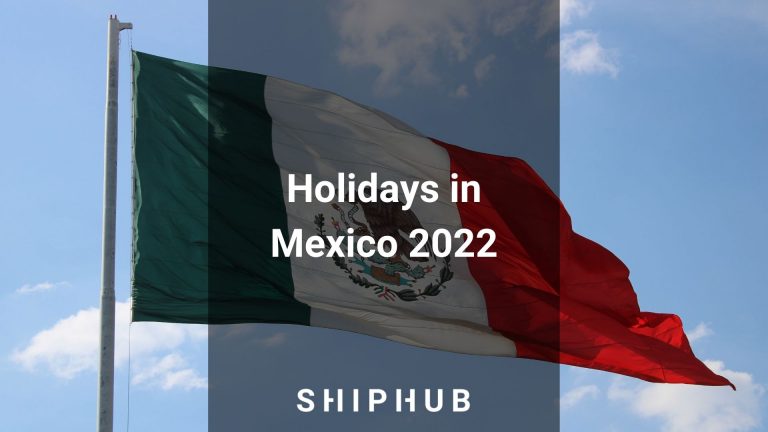 Before contacting our foreign business partner or scheduling a meeting with them, it is vital to know whether the time is proper. Therefore, it is worth learning more about their culture and public holidays in their calendar. Such knowledge will definitely contribute to maintaining a good relationship with your business partner. We present holidays in Mexico 2022.

When it comes to New Year’s Day, Mexico doesn’t differ from many other countries worldwide. It is a public holiday meant to celebrate the beginning of the new year that Mexicans usually spend with their family or friends. Many people attend parties or various events on December 31st and welcome the new year with rising a toast when the clock strikes midnight.

On January 1st, people gather to spend time together, eat leftovers from the previous night and get rest before starting a new year.

Another public holiday in Mexico is Constitution Day, falling on February 5th every year. This day is celebrated to commemorate the approval of the Mexican constitution. Please note that most institutions are closed that day, many businesses and shops also enjoy their day off. People can spend their free time attending music concerts and festivals, participating in street celebrations, or other activities occurring on Constitution Day.

It is worth mentioning that on this day there can be implemented temporary changes in public transportation schedules. Therefore, when traveling by public transport, it is recommended to check them beforehand.

The holiday is dedicated to celebrating the birthday of Mexico’s former president, who is recognized as a national hero. Benito Juarez has earned this title by making reforms that allowed Mexico to become a democratic federal republic. This day is also marked as a public holiday, meaning most businesses and institutions are closed so that the general population can enjoy their day off.

Most celebrations of this day happen in Benito’s Juarez birth city – San Pablo Guelatao. People in the city can enjoy fireworks shows, various contests, and other activities.

Celebrations of Easter in Mexico last two weeks, as it is one of the most important holidays in the country’s culture. Easter starts with the Holy Week (Semana Santa) on Palm Sunday (April 10th, 2022), which ends on the following Saturday (April 16th). It is a week leading up to Easter, after which there are another seven days of celebrations – Semana de Pascua. Holy Week is celebrated with ceremonies and parades, and rituals.

During these two weeks, schools are closed, and many business workers also can enjoy their time off. Therefore, people tend to travel a lot to visit their families or go on vacation to rest.

Labor Day is celebrated by a vast majority of countries in the world, including Mexico. The holiday is recognized in Mexico as Labor Day (Día del Trabajo) or May Day (Primero de Mayo). Most people have a day off and spend it resting or meeting their close ones. Some attend parades or demonstrations organized in the country by major cities to promote workers’ rights. Keep in mind that on Labor Day, public transportation may operate on a different schedule.

On Independence Day, people from Mexico commemorate the “Cry of Independence” or “Cry of Dolores” that Miguel Hidalgo made in the town of Dolores to stand against Spanish oppression. On this day, Mexicans put their flags up, attend parties and participate in celebrations. It is a day off from work; thus, most shops, businesses, banks, and other places are closed. Moreover, due to celebrations such as parades and marches, some streets are inaccessible to vehicles.

Revolution is one of the most significant patriotic holidays in Mexico, commemorating the beginning of the Mexican Revolution in 1910. It falls on the third Monday of November each year so that workers can enjoy a more extended break. During Revolution Day, people participate in marches, parades, and festivals organized in the country. On this day, businesses, shops, schools, and other institutions are mostly closed. Please note that some roads and streets in the cities may also remain closed for the duration of celebrations.

Mexicans of the Christian denomination spend Christmas Day similarly to other countries. This day is dedicated to commemorating the birth of Jesus Christ and meeting with family members. People gather to catch up on each other’s lives, eat a meal together, and get some rest. It is worth mentioning that Christmas celebrations in Mexico are not limited only to Christmas Day. They start from the Day of the Virgin of Guadalupe on December 12th and last until the Three Kings Day on January 6th. Visiting Mexico during this time guarantees learning about lots of local customs and culture.

Other holidays observed in Mexico

Apart from all the celebrations described, there are a few other holidays widely observed in Mexico. Although they are not considered public holidays, people still celebrate them. Therefore, it is convenient to know them and stay aware that it might be better to withdraw from conducting any business or scheduling meetings at their duration.

Day of the Races – October 12th

Day of the Races, known in Mexico as Dia de la Raza or the Day of the Pluricultural Nation, aims to recognize and appreciate the country’s multicultural, multiethnic, and multilingual wealth. It is celebrated not only in Mexico but also in other Latin countries. This day, there are held parades, marches, and other activities meant to teach respect for all people and cultures.

All Souls’ Day is one of the most important holidays in Mexico. It is also called the Day of the Dead (Día de los Muertos). In contrast to many other countries, Mexicans spend such a day happily, meeting with their families, often partying. Skeletons, coffins, and other symbols of this kind are frequently encountered and crucial for this holiday.

Moreover, people set up altars in their homes to honor their dead relatives. The altars are decorated with flowers, candles, photos, and food provided for the dead. Many people also gather on specially decorated for this day cemeteries to leave various objects on the graves, e.g., candles and flowers.

Lady of Guadalupe Day is a religious festival widely celebrated in Mexico. It is a day off for many organizations and some businesses, but not for all office workers. There are companies that, for example, organize meals for their employees on Lady of Guadalupe Day. The celebrations of the holiday start with a mass ceremony. Later, people can enjoy food or dance and music performances. Mexicans from all country regions gather in the Basilica of the Virgen of Guadalupe to participate in the ceremony.

Some holidays in Mexico are celebrated for more than just a few days, like Christmas or Easter, which may slow your import process. Public holidays typically mean obstacles in transportation, delays in deliveries, or even congestions. Days off can also influence production. During holidays the manufacturing of goods may be slowed or postponed due to factories’ temporary closures. Therefore, it is necessary to know when it is better not to organize your import and transport, to avoid such inconveniences.

Find out more about holidays in countries all over the world!