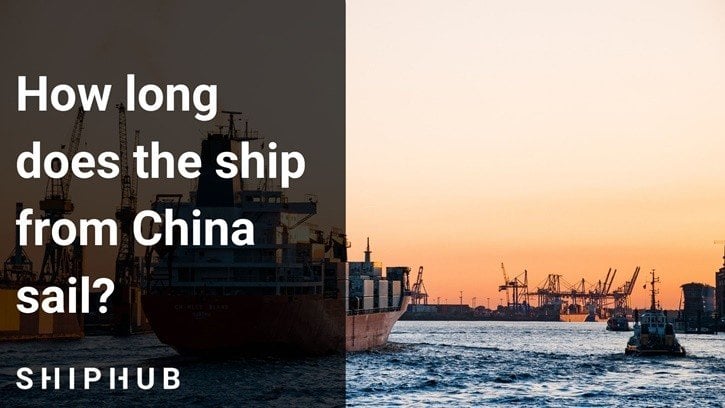 >> The Suez Canal blocked by the container ship Ever Given <<

There are land, air, and sea connections between Europe and China. The last option is particularly beneficial if the priority is money, not time. Other factors also speak behind this mode of transport of goods. There are no dimensional limitations on board of ships, you can accommodate any number of products, and the transport itself is safer than the other alternatives. Import from China consists of several stages: taking goods from the warehouse, sea transport by ship from China, customs clearance, land delivery in Europe. The process of sending sea shipments is also not complicated. In today’s article, we will check how long the ship from China sail.

Loads of traditional maritime transport are divided into:

Specially designed ships are used in the so-called oversized transport (eg, transport of wind farms, machines). It is divided into loads:

LCL – in this case, we use containers, but the customer “shares” its space with others. In this way, it reduces transport costs.

Europe has many ports. Most goods are transported through intermediaries of five container ports. These are Antwerp (Belgium), Felixstowe (United Kingdom), Hamburg (Germany), Le Havre (France), and also Rotterdam (the Netherlands).

Furthemore, rom loading on a ship, the goods sail to the destination port from 4 to 6 weeks. It is difficult to say exactly how long transport from China to Europe is going. Speed-up of the process is possible when using the services of forwarding companies. They maintain contacts with Chinese customs agencies so that the formalities are dealt with faster.

The customs control of loading, freight, loading the ship in China, unloading at the destination port needs time. In the case of resignation from self-pickup, the time required for the forwarding company to deliver the goods to the recipient should also be taken into account. For example, a container from the port of Shanghai to Gdańsk travels by sea usually 30-33 days. For comparison, rail transport from China to Poland takes from 9 to 14 days.

The delivery time described in the table above is transit time, which is the transit time from port to port. When importing from China, it is necessary to take an amendment to the door to door transport, ie, the time what product needs to reach to the recipient from the Chinese supplier. Which sometimes cause a few days delay. This is due to the need to carry out customs clearance (possible revision of the cargo), falling out at a given time free of wheeled transport (weekends and holidays). All factors cause the entire door to door to be extended by an additional 5-7 days.

The cost of sea transport – Ship from China

Sea freight is the cheapest option when transporting goods to and from China. However, prices change every month and sometimes every week.

The dollar exchange rate mainly influences the cost of sea transport. All forwarding services are settled using it. Other factors that fuel up the final price are the cost of fuel, the payment for passage of territorial waters, distance, global market situation, as well as the findings of the largest shipowners.

The traditional maritime route between China and Europe runs through the South China Sea, the Malacca Strait, the waters of the Indian Ocean and the Suez Canal. This route from China usually takes in 30-48 days.

Goods from Asia to Europe, sail through the Suez Canal. And from Japan to the Caribbean Sea through the Panama Canal. The option of choosing a route appears during transport from China to the East Coast of the United States. It is worth noting that the majority of vessels servicing trade between Asia and America returned to the Panama Canal. They left it for the Suez Canal in 2014.

The Northern Sea Route (NSR) – also known as the North-East Passage – is the shortest sea route connecting Europe and the Far East. It counts about 3,000 nautical miles and stretches along the northern coast of Russia, from the Karski Gate to the Bering Strait. The distance between Europe and the Far East is reduced by up to one third compared to the traditional route leading through the Suez Canal.

Formal barriers were removed in 2010. It was then permitted to use this route for the non-Russian mass carrier Nordic Barents. The trip from the Norwegian Kirkens to China began on September 4. It reached the Bering Strait on September 15, 2010, in a record time of 12 days. In the crossing, he was accompanied by Russian nuclear icebreakers, whose assistance cost amounted to 146,000 euros. Later, the Sovcomflot company’s tanker, route from Norway to South Korea crossed within 6.5 days. The ship Christophe de Margerie went without the help of icebreakers. Its construction made it possible to perform such a function.

Due to the crossing time from Western Europe to North-East Asia, the northern route seems to be a very tempting alternative to the road leading through the Suez Canal or Panama Canal. However, it is much more difficult. Russians mainly use it. September is there the warmest month, and the crossing of the route requires the use of icebreakers because 45% of the area is still covered by ice. However, Russian plans assume an increase in sea freight from 10.7 million tons in 2017 to 80 million tons in 2024. The export of liquefied gas and climate change will help achieve this goal.

Global warming as an opportunity for the North Sea Road

Melting glaciers make it easier to cross the North Sea Road. The area of ice in the north decreases year by year. Climate changes over the last 30 years have caused the melting of the Icy Ocean. According to estimates, in 2030, there will be no more ice there. A record low ice level was recorded in 2017. The same was said in 2016 and 2015. The situation persists, and scientists from NSIDC (National Snow and Ice Data Center) sound the alarm.

From an ecological point of view, the data presented by them is shocking. Especially considering that until now the North Sea Route was available only for four months a year, and it required the use of icebreakers to overcome it. However, what is perceived with horror for some, for others is perceived as a chance for enrichment.

China is becoming the most important partner of Russia during investments related to NSR. The multi-billion loans of the Chinese Development Bank or the Chinese initiative of the Polar Silk Road testify to the interest in this project. It should be noted that the state-owned CNPC concern holds as much as 20% of shares in the Yamal LNG terminal. On the other hand, 9.9% of shares are owned by the Chinese investment fund Silk Road Fund.

The Chinese have no experience in maritime transport on the northern route. They do not have many ships adapted to breaking the ice. Chinese freight transport company COSCO has one icebreaker, 160 m long. It was built in 2002 and allowed transporting about 19,000 tons of goods. However, it seems that climate change is in favor of Central China entrepreneurs, which is why China is aiming to use NSR as a route to European markets. Will the ship from China sail faster?

In 2017, trade with the EU amounted to approx. 573 billion EUR, of which over 60% of trade came from maritime transport. Forecasts indicate that in 2025, the exchange of goods may exceed 650 billion EUR.

The transport of goods by sea is undoubtedly one of the cheapest forms of transportation, however, one must take into account the fact that the ship from China is flowing for quite a long time. Usually, it is for 30-33 days. If someone cares about lower costs, he should choose this form, but if it also depends on time, it is proposed to choose railway transport.