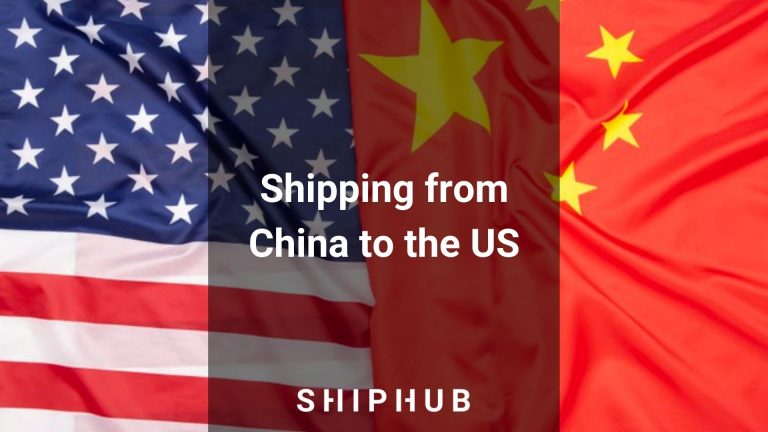 China’s position as the second world economy makes it an incredibly valuable trade partner. As of 2021, China’s main import products are electrical machinery, mineral fuels (including oil), and mechanical products. For years, a large part of the relationship between the US and China has been centered around trade, as China and the US have become each other’s leading trading partners.

Due to the US and China’s ongoing trade war, a 25% tariff has been imposed on 66% of all incoming Chinese goods. Despite this, both Chinese imports to the US and US exports to China have jumped around 30% as of March 2021, proving that trade between the two countries remains strong. In this article, we will take a look at the existing hurdles relating to the US tariffs imposed on Chinese imports and which shipping method to the US is most favorable at the moment. We present all you need to know about shipping from China to the US.

Chinese importers often trade with American entrepreneurs, so they are familiar with the various shipping methods. Since the Pacific Ocean separates China and the US, we have two primary forms of transporting products from one continent to the other. Which way you choose will be based on different variables, such as the product load, destination, and timing requirements.

Ocean freight from China to the US

The most straightforward and affordable shipping option from China to the US is maritime transport. It is also the best way to transport large and bulky purchases, as cargo ships carry both Less than Container Load (LCL) and Full Container Load (FCL).

Unfortunately, it is also the slowest available option, as it can take up to 35 days for a cargo ship to arrive from China. Transit time will vary depending on the chosen seaport of departure and arrival. On average, ocean freight will take about ten days longer if the port of arrival is located on the East Coast rather than the West Coast, as the route is less straightforward.

1) Shanghai: The largest seaport in the world since overtaking Singapore’s position in 2010. The Shanghai seaport spans over 3500 km2 and is connected to other, smaller ports, allowing it to process much more cargo than any different port in the world.

In 2020, the port of Shanghai handled containers with a capacity of 43.3 million TEU. The vast majority of incoming and outgoing traffic is handled by the Yangshan Port, which is the largest automated port in the world.

2) Shenzhen: The second largest seaport in China and fourth-largest in the world. It is located in the southern part of China, in the Shenzhen Special Economic Zone. Similar to the port of Shanghai, it is also formed by several smaller ports, and it is one of the fastest-growing seaports in the world. Closely located to Hong Kong, it is part of the Hong-Kong-Shenzhen Western corridor, which crosses the border between China and Hong Kong. In 2020, the total container throughput reached over 25 million TEUs.

3) Ningbo-Zhoushan: The busiest seaport globally in terms of cargo tonnage, it is responsible for shipping over a billion tons of cargo every year. It is located in the Zhejiang province, which is nowadays one of the more prosperous Chinese provinces. As of 2020, Zhoushan is now the art of the Zhejiang Free-Trade Zone, meant to lead technical and digital innovation, although currently, it is mainly responsible for transporting mineral fuels. In 2020, Ningbo-Zhoushan handled 27.5 million TEU.

4) Hong Kong: Although it is a part of China, Hong Kong functions under different administrative laws, which might be more beneficial to American entrepreneurs. It is a deep-water seaport located in the south of China. It is one of the busiest seaports in the world, connecting over 600 destinations worldwide. The port of Hong Kong includes mid-stream sites, which allow ships to empty the vessel during hazardous weather conditions safely. In 2020, this seaport handled over 18 million TEUs of containers.

5) Guangzhou: The fifth-largest container port in the world as of 2018. It is currently one of the most well-connected ports in mainland China, with easy access to most Chinese provinces. Ships from the port of Guangzhou also reach over 80 countries worldwide. This seaport is a key economic element of the Pearl River Delta region and its surrounding provinces. The deep-water port of Nansha handles over 70% of all cargo in Guangzhou. In 2020, the port’s throughput exceeded 21.1 million TEU.

Air Freight from China to the US

In case of any time constraints, air freight is the way to go. Indeed, shipping via cargo airplanes might take as little as 2-3 days, although transit time might take up to 15 days, depending on the chosen cargo airport. Naturally, this form of shipping boasts much higher freight rates, and shipping goods heavier than 500kg is not recommended.

If the number of goods is particularly low (less than 150kg), it might be advantageous to consider Express shipping. Regular air freight involves complex processing that is not present when shipping through international couriers (FedEx, UPS, DHL, etc.), and Express shipping guarantees a much shorter transit time (1-5 days).

1) Hong Kong International Airport: This airport, first opened in 1988, was the largest cargo airport in the world until very recently. In 2020 cargo traffic reached almost 4.5 million tons, accounting for nearly half of Hong Kong’s external trade. Hong Kong International Airport is considered the world’s premier international airfreight hub due to its many available services and facilities. It handles over 100 airlines and services in over 180 cities worldwide.

4) Guangzhou Baiyun International: China’s fourth busiest airport in terms of cargo traffic as of 2020 has been operating since 2004. Worldwide, Guangzhou’s airport is listed as the 16th busiest cargo hub, with total cargo traffic reaching 1,9 million tons, increasing 1,7%. It is one of the leading Asian hubs for FedEx Express. During the COVID-19 pandemic, it was also the busiest airport globally in terms of passenger traffic.

5) Shenzhen Bao’an International: Since its first opening in 1991, it is currently the fifth busiest cargo hub in China. With a 9 percent growth in freight volume in 2020, Shenzhen airport is expected to surpass other Chinese airports in the near future. The airport has recently undergone various renovations and expansions to increase and better its available services. Additionally, it is the main Asian-Pacific hub for UPS Airlines.

Shipping from China to the US – Tariffs and Taxes

When shipping products from China to the US, it is essential to read about the various import duties, customs fees, and taxes that will need to be paid once the products enter US territory.

Firstly, any goods valued at over 800 USD will be taxed. In order to calculate tariffs, importers have to declare the transaction value of their products. Since Trump’s imposed tariffs on Chinese imports, nearly 370 billion USD worth of Chinese goods has been affected. Currently, three official lists detail the HS codes of all products affected by the 25% tariff. These products range from machinery parts to seafood and clothing accessories.

efore importing products from China, it is, therefore, necessary to review these three lists to determine whether or not you will need to pay the US-sanctioned tariffs. As of May 2021, President Biden has not yet commented on a possible review of the conditions of the US-China trade war.

Shipping from China to the US – Costs

In order to facilitate the process of importing goods from China, it might be beneficial to compare offers from different shipping companies. By using the platform ShipHub.co, you will be able to easily compare freight rates, depending on your chosen mode of shipment and cargo. Fill in the form as shown in the picture below and find the best way of shipping from China to the US!