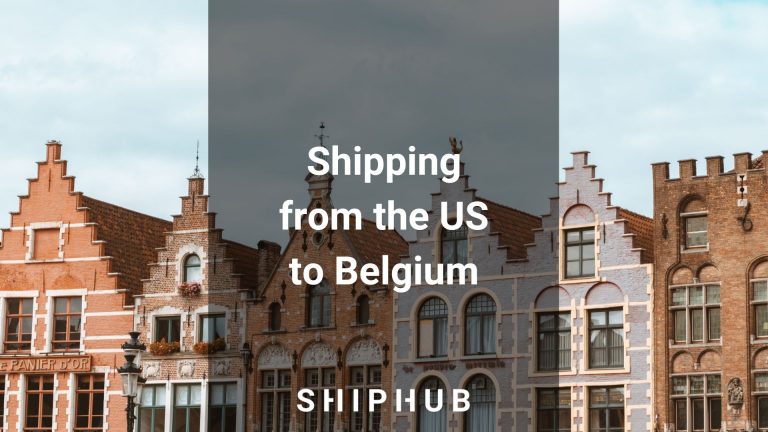 The United States and the European Union are Belgium’s main trading partners. The US and Belgium are also close NATO Allies, cooperating on a wide range of foreign policy issues. Belgium’s total trade with the United States in April is $5.54 billion, ranking 20th among US trade partners. There are two ways of shipping from the US to Belgium: by sea and air.

The Belgian capital of Brussels is home to the headquarters of the European Union and the North Atlantic Treaty Organization, as well as hundreds of international institutions and associations. It is frequently referred to as “the capital of Europe.” Belgium is also one of the world’s top trading nations, ranking among the top 20 as foreign trade accounts for nearly 70% of the country’s GDP.

Some consider Belgium to be Europe’s logistics epicenter, as it has an extensive transportation network, including one of the largest cargo airports and container ports in Europe. Despite having a diverse commercial and industrial base, the country is heavily reliant on imports due to the significant raw material requirements.

Shipping from the US to Belgium

Ocean Freight from the US to Belgium

Sea freight is a popular shipping method because it is very cost-effective. It is also the best choice for importing larger quantities of goods that must be shipped in containers.

Container shipping is divided into two main categories: FCL (Full Container Load) and LCL (Less than Container Load). FCL refers to using the entire capacity of the container and is recommended for cargo that takes up a lot of space. In contrast, LCL refers to sharing a container with other importers/exporters. It is suitable for transporting smaller quantities of small-sized goods. A full container is your best option if you want to avoid any risk of damage to your goods from contact with the goods shipped by others.

Many factors will influence how long it takes for your shipment to arrive. In most cases, the transit time from the east coast to Belgium is approximately three weeks.

The port of Antwerp, located on the Scheldt River, is Belgium’s largest and Europe’s second largest container port. It is also one of the world’s top 15 container ports, with over 800 destinations. The top five routes connect the port to Houston (Texas), Minneapolis, New York, Seattle, and Valencia.

Main cargo ports in the US:

Air Freight from the US to Belgium

Liege Airport is Belgium’s largest cargo airport and one of the top ten in Europe. It is located in Grâce-Hollogne, Belgium, 9 kilometers from the capital city of the Liege province of the same name. It specializes in cargo and charter flights.

Airfreight from the US to Belgium takes about 1-5 days.

Main cargo airports in the US:

Shipping from the US to Belgium – Costs

Shipping costs vary depending on the mode of transportation, the distance and route traveled, the size and type of cargo, and the freight forwarder. As a result, before making your final decision, we strongly advise comparing at least a few offers from various forwarders. ShipHub provides you with a detailed quote for your international shipment. Fill out the form on the official website, and the freight forwarders will give you shipping quotes.