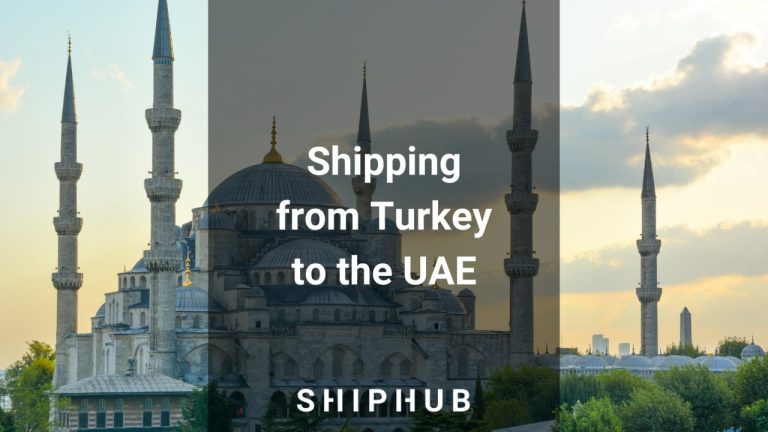 Turkey and the United Arab Emirates are both located in Western Asia and are sea-friendly regions that are significant in international shipping. Trade relations between these two countries have been steadily growing over the years. Statistically, the average annual trade volume between these two countries is $8 billion, with the UAE being Turkey’s biggest trade partner among Arab countries. What are the methods of shipping from Turkey to the UAE?

Shipping from Turkey to the UAE

Officially known as the Republic of Turkey, located between Europe and Asia, Turkey is a country of diverse cultures, beliefs, ideas, nature, and history. It is known for exporting one of the finest silks, spices, and technology. Additionally, it is known for its abundance and diversity of customs, traditions, music, cuisine, and imperial legacy. Furthermore, Turkey is home to the largest manufacturing base in the MENA. Its production output is believed to meet the demand of various Gulf countries in the future since they import 90% of its manufactured goods on the market. Over the last decade, Turkey has been working to maintain and develop its relations with the Arab allies, as one of its foreign policy goals is to have “Zero problems with neighbors.”

The United Arab Emirates is known for its infrastructure, innovation, and high GDP per capita. The country has also become a popular destination for wealthy expatriates, individuals that reside in a foreign country, whether by employer’s choice or their own. This Arab country, located near the southern end of the Persian Gulf, is home to several extremely modern and advanced cities, beautiful beach resorts, and is known for year-round sunshine. Although Abu Dhabi is the UAE’s official capital city, Dubai has grown to become the country’s major financial center.

The UAE is the 12th biggest Turkey import partner from a global perspective. Turkey and the United Arab Emirates have strong investment relations in many sectors such as tourism, banking, energy, and technology. From a business perspective, they have a similar state-of-the-art infrastructure designed to be one of the world’s most important supply chains, which is evident from both their modern seaports and airports.

The common goal of these two countries is to become a logistical hub for international trade. It can be accomplished when the road between the two countries via Iran and a potential railway project parallel to the same land route are completed. Since the projects are not under fruition yet, there are two methods of shipping available: sea transport and air transport.

Sea freight from Turkey to the UAE

Sea transport is recommended for shipping large shipments since they are less expensive than other types of shipping, and it is easier to ship a lot of cargo at once. The UAE’s largest container terminal is Dubai’s Port of Jebel Ali, which is also the busiest commercial port in the entire Middle East. The second busiest port is the Khalifa Port. When a container arrives in the UAE, it must pass through customs before being transshipped onto a truck or train.

There are two types of shipments in sea freight: full container load (FCL) and less than container load (LCL). LCL is a more expensive option than FCL, but if you cannot fill the whole container, then LCL is required. LCL is suitable for shipping small shipments. FCL is faster than LCL since cargo arrives at the port and is delivered to the buyer, and LCL has multiple shipments mixed in, so it requires more handling that may cause delays. Typically, sea shipping from Turkey to the UAE takes about two weeks.

Air freight from Turkey to the UAE

Air transport is the fastest and safest shipping method, but it is also expensive compared to sea shipping. It is recommended mainly for small shipments of valuable or fragile products. It takes around 2 or 3 days to ship goods by air to the UAE.

Turkey and the UAE are known for their two huge airports, Istanbul’s Ataturk Cargo Airport and Dubai’s world-famous airport, Dubai International Airport. The more cargo weights, the more expensive is the air freight. Weight is not the key factor when it comes to sea shipping.

Main cargo airports in the UAE:

How much does it cost to ship from Turkey to the UAE?

The final shipping cost depends on many factors like the type of cargo, special requirements, method of transport, and the chosen freight forwarder. On ShipHub, you will quickly receive an in-depth quote on your shipment. Just fill in the form on the website, and verified freight forwarders will send you the offers.