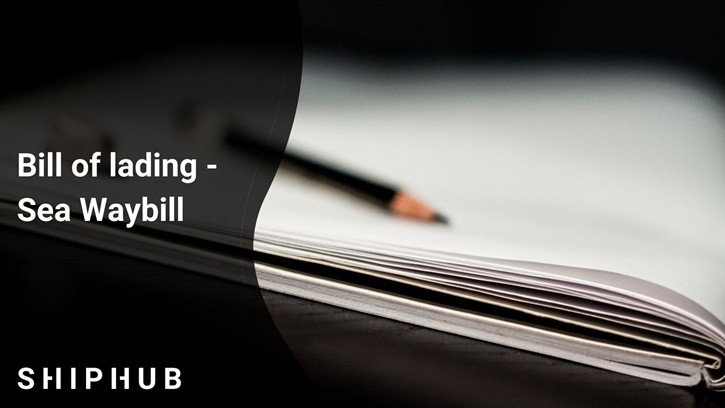 Correctly filled transport documents are essential for the implementation of any international transport. Furthermore, each of the transport branches has its own pattern of the bill of landing. Maritime law distinguishes charter part, a note of booking or bill of lading. The last one is one of the most important in the case of international maritime transport.

What is a bill of landing?

Bill of lading (BOL or B / L) is a sea consignment note, a document confirming the receipt of a specific cargo on a ship. The holder of this document may pick up the sent load at the destination port. Above all, it is not a contract for the carriage of goods/cargo between the carrier and the shipper. The bill of lading is not a contract for carriage, but only proof that the contract was concluded before the load was transferred to the captain. Its conditions should match the terms of the transport contract (charter and booking agreement).

According to Article 131 § 1 of the Maritime Code Act of 18 September 2001 (provisions governing maritime transport): “The bill of lading is also evidence of the cargo designated therein for carriage and is a document proving to dispose of this cargo and its reception”. It is worth remembering that the provisions of the contract of carriage bind the recipient only when the bill of lading refers to them (§ 3 of Article 131 in fine).

It is a transferable document (security that can be traded). It is displayed at the request of the shipper, recipient or bank:

If we use the services of a forwarding company, we may receive bills of lading issued directly by the shipowner/sea carrier, i.e., Master Bill of Lading (M / BL). It may happen that a Bill of Lading (H / BL) will be delivered to our hands, which we must provide and deposit at the forwarding agent’s office at the destination port, and then he will contact the shipowner to deliver the container or goods from the port

The process of issuing a bill of lading

After accepting the products to the ship, the carrier is obliged to issue a bill of lading at loader’s request. If earlier the ship’s receipt has been issued for this load, the carrier may make the release of the bill of lading dependent on their return. It provides proof of acceptance of the cargo to the ship for transport and is a document proving that the cargo is to be handled and picked up. The document is issued by a bill of lading instruction received from the shipper/exporter or based on the entries contained in the letter of credit.

What must the Bill of Lading contain?

Bill of lading must contain:

Proceeding in the case of loss of the bill of lading

This document is issued in several numbered copies, each of which is the original of the document. Usually, there are three originals marked in succession 1/3, 2/3 / and 3/3. The number of copies is unlimited, it depends on the client’s requirements, but usually, 5-6 copies are printed. A bill of lading is security, and in the case of its loss, the container is stopped by the carrier until the bill of lading is delivered. This is related to the need to pay the following costs of cargo in the port.

The loss of the original sea waybill requires additional complicated, expensive and long-lasting actions by the exporter’s shipper. It also involves the presentation of perpetuation or long-term bank guarantees to the carrier (shipowner) to deliver the container/goods to the recipient without presenting the original Bills of Lading. If the courier company has lost the bills of lading, you should immediately contact them and request documents. If the fault lies on the other side, please contact the shipping carrier and determine what documents you need to deliver the cargo. Usually, these are bank guarantees and payment of a specific sum of money.