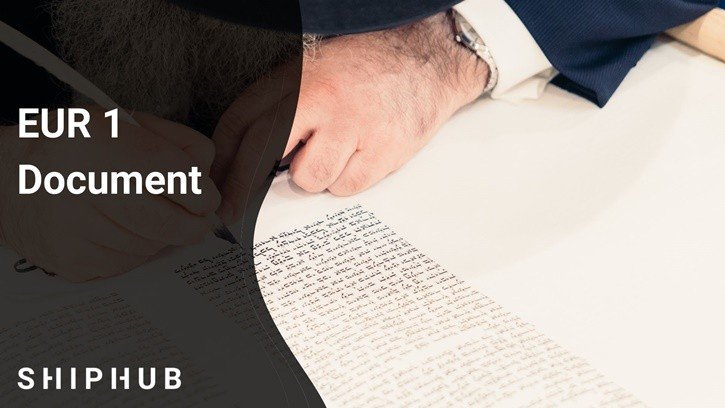 The situation in the international market is continuously changing. In connection with the creation of regional free trade areas, the rules of origin of goods have acquired particular significance. Therefore, the EUR 1 Document plays an important role in international commercial transactions. It confirms the origin of the products, and in special circumstances (embargo or war) the document is a guarantee of safe transport.

What is the EUR 1 document?

Document EUR 1 is a certificate of origin. It is issued by a chamber of commerce or industry and trade. It shall be drawn up on the designated form at the request of the exporter to confirm the country of origin of the goods. Besides, the document is necessary when entering the markets of some countries or customs unions. Moreover, an importer with a certificate of origin is entitled to benefit from special customs tariffs. The EUR 1 document must be delivered to the customs authorities of the importing country.

Also, it is worth remembering that the certificate of origin is issued separately for each batch of goods, which will be sent and subjected to customs clearance in its entirety and at the same time. Some countries have their forms and requirements to issue a certificate of origin on it. At the same time, the description of the goods can’t leave any doubts for its subsequent identification.

Determining the country of origin

International regulations say that if many countries were involved in the production of goods, it is considered that the product comes from a country where it has been subjected to final and economically justified processing or processing as a result of which a completely new product was created or it was an important part of the process production. In practice, for clarity, it has been assumed that this treatment or processing must increase the value of the product by more than 50%. Besides, the law requires that the handling or processing should be performed in a company adapted for that purpose. The EUR 1 document should always contain this type of information.

The following division determines the country of origin of the goods:

The EUR 1 document also helps to set the rates of customs duties. This is related to the fact that goods from one region of the world in different countries can be treated under different conditions. Preferential agreements, for example, allow goods originating from African countries for preferential duty rates. Now, Africa is recognized as a developing region of the world, which is why a large part of the goods produced on this continent has a zero duty.

Preferential rules are usually stricter than non-preferential ones. They are determined by members of regional free trade areas or countries that have joined the preferential trade agreement. This is to ensure that only those goods that originate in one of the member countries of the community benefit from low customs duties and other benefits granted by the agreement.

What makes the EUR 1 document distinguish itself?

The EUR 1 document is one of the most common certificates of origin on the international market. Well, it is issued when there is a preferential bilateral agreement between one of the countries belonging to the European Union and a specific country of import. As a result, the EUR 1 document confirms the European origin of the goods imported into third countries. Only products for which preferential duty rates can be applied, has such a certificate as EUR 1. In practice, this means lowering the customs duty in the country of import.