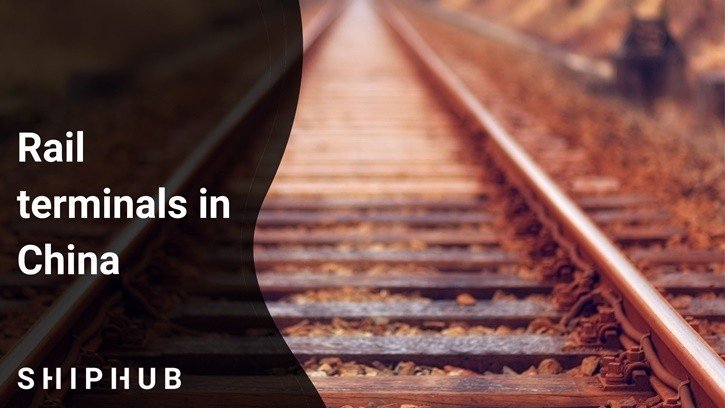 One of the most dynamically developing branches of logistics on imports from China is rail transport. Many people say that this is the best method of transportation. It is shorter than sea transport, and it is cheaper than air transport. Where are the rail terminals in China? Which one is the best? We invite you to familiarize yourself with the infographics presented by us and short descriptions of major railway terminals.

This is the most important terminal in China, also considered as the most reliable. It is terminal, financed by the Chinese government. It’s part of the New Silk Road. Currently, trains to and from Chengdu leave every day and everything points that the number will instantly grow. Trains from Chengdu to Lodz have been arriving since 2013. In 2015, they opened regular railways connections between these cities. The train travels this route in two weeks. They invested several hundred million dollars in the terminal in Chengdu. This year, the total number of trains from Chengdu to Europe increased by 1,000. The city has fourteen rail routes.

This is one of the main railway terminals located in China. Similarly to the terminal in Chengdu, the terminal in Wuhan is also paid for by the Chinese government. It is considered one of the most reliable terminals. Wuhan also has a railway connection with Lodz. Overcoming the route takes 15 days and runs through the central and north-eastern areas of China. Most of the transported content is the products of the well-known Foxconn company. Because of that the importance and prestige of the city, which becomes a potential place for the location of production for international corporations, increases.

More about rail terminal in Wuhan

The railway transshipment port in Wuhan has the necessary functions and institutions responsible for customs clearance. The place is located in the center of the Yangtze River basin. The international terminal contributes to the development of the region. According to the data, 375 trains arrived from Wuhan to Europe in 2017. Wuhan has sixteen railways to 28 European countries.

It’s an international railway terminal, aimed at increasing trade between China and Europe. It’s planned to have more trains arrived. The terminal is equipped with the necessary equipment and machines. It’s an important place for the ‘One Belt and One Road’ initiative due to the multimodal transport infrastructure. In 2013, freight trains were launched from Xi’an to Central Asia, and then the administration decided about opening new routes to Europe. The Xi’an terminal sends trains to Europe every day. Usually, they are transporting construction materials, mechanical equipment, food, and everyday items.

Also, they approved the Xi’an terminal as a point of import of meat and grain. The terminal intends to become the most significant international distribution center along the New Silk Road and decides to increase trade between neighboring countries.

This terminal has a perfect connection to Hamburg, which takes only 15 days. In 2017, from January to November, trains from Zhengzhou to Hamburg made exactly 449 trips. During this period, they delivered over 234,000 tons of cargo worth 2.44 billion dollars. The first train from Zhengzhou to Hamburg left in July 2013. The frequency of transport from one per month increased to eight per week under the control of the New Silk Road initiative. Over the last four years, 472,500 tons of cargo worth 4.92 billion dollars have been transported on this route. Various goods are transported, including textiles, car parts, medical equipment, electronics, and clothing. The products were delivered to 121 different cities in 24 countries of the European Union, Russia, and Central Asia.

It is a terminal located in Zhejiang Province, in the city of Yiwu, known as a small trade center for goods. From Yiwu runs the longest train route in the world, ending in Madrid. The distance is about 13,000 km. The line passes through Kazakhstan, Russia, Belarus, Poland, Germany, and France. The trip lasts 21 days. For comparison – a journey by sea would take about six weeks. The second-largest rail route in the world is also located in Yiwu and leads to London. It is about 12,000 km.

More about rail terminal in Yiwu

The road was opened on January 1, 2017, and the trip takes 18 days. The route passes through Kazakhstan, Russia, Belarus, Poland, Germany, Belgium, France, and the United Kingdom. The road passes through Eurotunnel (railway tunnel under the Strait of Dover). It is the first railway connection between China and Great Britain. Yiwu also has links to the Czech Republic and the Netherlands. According to customs statistics, imports and exports through the Sino-Europe Yiwu service have increased sharply, reaching 3 billion yuan in 2016.

The terminal is famous due to the short distance from Beijing. It’s another Chinese city connected to Europe via a railway line. In 2016, they opened the Tianjin-Minsk route. The course runs through Inner Mongolia. Trains annually are to carry about 30,000 tons of cargo. The next important route is connected with Moscow. This can provide convenient and rapid logistical support and services to accelerate economic and trade exchange between the two countries.

More about rail terminal in Tianjin

The route is 7 600 km long, and the trip takes 12 days. The goods transported from Tianjin to Moscow are primarily automotive engines and everyday articles. However, products carried from Russia to China are mainly wooden panels. In the future, there will be much more rail connections between Tianjin and Central Asia and Europe. Tianjin in recent years has strengthened its position as an international terminal, building several cross-border rail connections. The city continually promotes the construction of transit trains.

A railway line leading to Duisburg in Germany leaves from the Chongqing terminal. The road passes through Kazakhstan, Russia, Belarus, and Poland. Similarly to the lines above, this is part of the ‘One Belt and One Road’ initiative. Most of the goods transported this way comes from international IT companies in Chongqing such as Foxconn. Overcoming the route of over 11,000 km usually takes 13-16 days. The first line connecting Chongqing with Europe was established in 2011.

More about rail terminal in Chongqing

According to the data, in 2017, trains to South Asia, and more specifically Vietnam, also set off from Chongqing. They transport mainly mechanical equipment and industrial materials to Vietnam. Imported back will be primarily tropical fruit, rice, coffee, as well as electronic goods produced by factories in Vietnam, founded by world producers. In the future, there will be even more rail connections between China and Southeast Asia, including Thailand, Laos, and Singapore. An important connection was also established between the terminal in Chongqing and the terminal in Ningbo. Transportation of goods will be shortened by 12 days (transport by sea across the Yangtze River) and will last only 58 hours.

It’s a terminal, which has the perfect connection with Warsaw. Transports take place regularly, two to three times a week. Travel time is about 14 days. Suzhou is a strategic terminal for Jiangsu Province. Freight trains servicing this connection will travel along the Trans-Siberian railway route. From Suzhou, they are mainly transporting electronic products, instruments, and branded clothes.

The capital of the Hubei province has recently been described as the national transport center. Also, a train from Changsha set off on August 16 this year and went on a test trip to Tilburg in the Netherlands. It arrived on the spot after 17 days. The connection will be introduced permanently, and every week on Thursday, a freight train will depart from Changsha to the Netherlands.

More about rail terminal in Changsha

The entire route is less than 13,000 km. Trains from Chengdu also arrive in Tilburg, but those traveling from Changsha will be able to take with them more tons of cargo. There is also a perfect rail connection between Changsha and Budapest. To China from Hungary, mainly red wine, powdered milk and accessories are transported.

Rail terminals and its selection

Rail transport is shorter than sea transport and cheaper than air transport. Maybe it is worth considering the choice of this type of transportation of your products.

Before choosing the right terminal for you, it is worth checking the delivery time and transport costs. Due to the distance to the destination, the rates differ from each other. Usually, the delivery time is about 15 days. Time can be extended up to 25 days when choosing a door-to-door delivery option.  The delivery cost is about $ 4,500.

We invite you to look at the price comparison of rail transport from China. After filling out the form, we will receive offers from forwarding companies. We will be able to compare price offers and choose the right way to deliver goods.