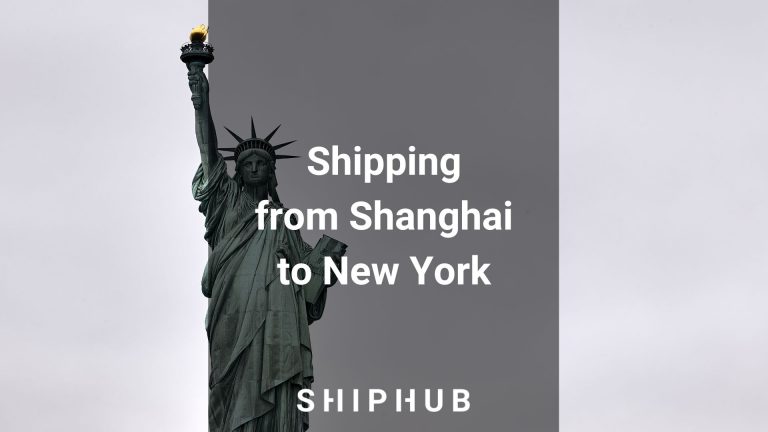 In business and other contexts, the following phrase is often heard; “Beijing is China’s capital, but Shanghai is China’s capital capital.” It is not only because Shanghai is the most populated and urban area in China but also the heart of China where most major commercial decisions are made. Shanghai is considered one of China’s biggest cities, a global financial hub, a prime location for most foreign head offices in China, and home to the biggest port in the world. On the other side of the world, New York mirrors Shanghai in terms of the US and China. Get to know the best ways of shipping from Shanghai to New York.

Shipping from Shanghai to New York

New York and Shanghai are considered top trading partners, exporting 100s billions of assets between these economic giants yearly. Over decades, Shanghai became a manufacturing superpower. A majority of the world’s consumer products are produced there, and importing from Shanghai has proven time and time again to be a consistent global source for international businesses.

Logistically, sea freight is one of the most economical ways to ship goods over long distances. The only downside of sea freight is its long transit time. In Shanghai, the most efficient and affordable shipping option to New York is maritime transport. Not only is this the best method to transport large products for LCL (Less than Container Load), but also for FCL (Full Container Load) since their cargo ships can accommodate both shipments. LCL shipments are transported in containers alongside cargo from other businesses, which is why it is recommended for a smaller load. For cargo that requires a whole container, FCL should be chosen, which is cheaper and faster.

A typical shipment to New York takes 30-40 days. Of course, transit time can vary depending on the chosen seaport of departure and arrival, but sea freight is considered the slowest transport option. For this reason, it is important to consider the type of goods that are being imported since goods with short expiry dates should be shipped using different methods.

The Port of Shanghai

The Port of Shanghai is also referred to as ‘SIGP,’ as it is operated by the Shanghai International Port (Group) and spans an area of about 4.2km. Its first recorded service dates back to 1842 and has eventually grown to not only be one of the most important ports of the region but also recognizably worldwide. Geographically, this port is linked with the Yangtze River, which conveniently flows into multiple provinces of China. Undoubtedly, this port is one of the most important gateways for Chinese foreign trade. Ports are often referred to as small cities filled with containers rather than villages of houses. The Port of Shanghai included both a deep seaport and a river port.

New York’s port, Newark, is the largest seaport on the East Coast. It is also ranked as the third busiest seaport in America, as it is the main entry point into the New York Metropolitan Area. Newark is the gateway to the most concentrated consumer markets in the world. It is known for handling commodities such as petroleum, scrap metal, bulk, and break bulk cargo.

When considering transport with time constraints, air freight is often the primary choice, usually taking 2-3 days (although transit time may take up to 15 days depending on the place of origin). The only limitation is that goods exceeding 500kg are not recommended to take air freight.

Generally speaking, if the number of goods does not surpass 150 kg, it is more advantageous to proceed with ‘Express shipping’ which guarantees a shorter transit time (1-5 days). Another downside of air freight is extended security and processing measures. Moreover, air freight is also the most expensive means of transportation. With these factors in mind, air freight is worth shipping by air small consignments of perishable and valuable goods.

Shipping by air averages 3-4 days, whereas sea freight may take up to 5 weeks. In fact, total flight time is less than one full day, but air-cargo transit times include the processing time that comes with shipping, such as consolidation at departure airport, export customs procedures, unloading at destination airport, and import customs clearance.

If indirect flights are used for your freight, you must also take into consideration the transshipment time. Any transshipment might delay your shipments for hours. You will need to allow weeks rather than days for shipping in case of ocean freight. The voyage duration will depend on the route and whether the carrier operates a direct service or one that visits several ports before arriving at your shipment’s destination.

Shanghai Pudong International Airport is the 2nd largest cargo airport in China and the 3rd largest hub in the world. Originally opened in 1999, recently in 2020, its total cargo air volume reached 3.1 million tons.

JFK International Airport, New York, is the busiest of the 6 airports in New York’s airport system and ranks as the 13th busiest airport in the United States. It is ranked as the busiest international air passenger gateway for North America. In 2014 it was documented to handle 3.37 billion pounds of cargo (which was 3.49% less than the previous year). Over 90 airlines operate indirectly from this airport, with nonstop or direct flights to destinations in all six inhabited continents.

Shipping cost varies depending on the type of transportation, cargo type and size, chosen forwarder, and some other factors. It is best to compare different freight forwarders because every one of them will give you a different offer. You can easily do it on ShipHub by just filling in the form on the official website, as shown in the picture below. Various freight forwarders will contact you with their quotes to choose from.