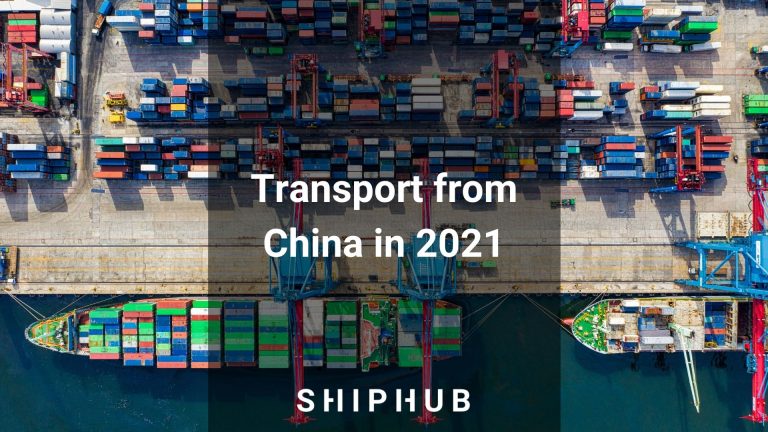 The year 2021 is expected to bring importers considerable problems with the transport of goods imported from China. In the era of rapid transportation changes, it is worth knowing what to expect and what circumstances one should be prepared for. We present the forecasts for importers of Chinese products for 2021 and propose how to deal with the inconveniences.

Significant difficulties in the transport of goods from China have already begun to appear in December 2020. The reactivation of imports in the fourth quarter of this year, and thus an increase in production and orders, resulted in an extended transit time for all means of transport. Delays in deliveries, rising freight prices, the lack of containers in ports, and the lack of free space for transporting goods are problems that many importers have already encountered.

Transport from China – forecasts for 2021

Next year is expected to be a tough one for importers of goods from China. Due to the significant decline in orders in the second and third quarters of 2020, the economies were thawed in the fourth quarter. The increase in demand and supply has resulted in a sudden rise in imports, along with production delays and supply chain congestions between China and Europe. This situation is also expected to continue in the first quarter of 2021. Besides, it will also include the three-week Chinese New Year. Its celebrations will start on February 12, 2021 and will stop production and deliveries. What changes can we expect?

Maritime transport is most often chosen by importers who care about high load capacity and saving their money. Moreover, transporting goods by sea enables any cargo, both FCL, and LCL, of any weight. The waiting time for the delivery of products by this method is the longest.

In 2021, transit time for maritime transport is expected to be even longer. Already in December 2020, it was even up to 45 days or more. The increasing waiting time is mainly caused by the lack of free space on ships and containers’ unavailability. There may also be delays in deliveries due to a pile-up of loads meant to be shipped before Chinese New Year.

Furthermore, freight prices will keep increasing. Currently, for the transport of FCL cargo using a 40’HC container, you will pay about USD 5700. Such rates can reach even up to USD 8000 for the same type of container in January and February. Until now, maritime transportation has been the cheapest out of available methods, but it is expected that sea rates will be approximated with rail rates. We can already notice minor differences in their costs. For shipping goods by railway in a 20’DV container, you will pay about USD 3800, and by sea, USD 3500. According to forecasts, transit rates will not fall until the end of February or the beginning of March. However, their amounts may not return to values before the pandemic.

In recent years, we could have noticed a dynamic development of railway transport, which has become an alternative to sea and air transport over time. In 2017, 3,600 freight trains travelled between China and Europe, and in 2019 this number increased to 8,000.  Permanent rail connections from China to European countries have also been established, e.g., Xi’an’s route to Małaszewicze in Poland or from Yantai to Germany.

Transit time for railway transport has also been extended to about 20 – 25 days and above. One needs always to consider that any technical problems such as congestions have to be added to the transportation time. Railway delivery is also not a door-to-door delivery. Thus, the whole procedure can take even up to 40 days.

In the case of rail transport, transit prices have also increased and will keep rising until the turn of February and March. According to the forecast, they are expected to be approximated with the rates for maritime transport.

New containers may also appear in rail transport in 2021. 20’ containers are predicted to be accepted for railway transport.

Air transport is known for the shortest transit time and thus the fastest delivery of goods. Due to its safety and speed, it is most often used to deliver food and pharmaceutical products, but also cars, jewelry and furniture.

Until recently, air transport could boast a transit time lasting only a few days. Currently, the waiting time for a parcel sent by air has been extended to about two weeks. Price changes in air transport are very dynamic, and transit rates are very high. In 2021, they are expected to be even higher, and airlines will be increasing them depending on space availability. With the prolonging transit time, importers are advised not to use this means of transport in the near future.

It is expected that due to the pandemic, cargo flights will not be resumed at least in early 2021. It will result in a significant reduction in the transport space.

The year 2021 is meant to be a period of dynamic development for road transport. One of the reasons is the shortage of containers in ports and extended transit time for transportation means. It is expected to become an alternative to, e.g., costly air transport. Road transport may turn out to be a beneficial choice, among others for companies that need fixed-term goods.

Currently, there are several forwarders offering road transport of goods. There are also regular connections between China and Europe, e.g., on the Yinchuan – Belgium or Xi’an – Poland routes.

One of the main advantages of this transport is the possibility of door-to-door delivery. The transit time of such a delivery is from 16 to 18 days, but one should keep in mind exceptional situations that may lead to its extension. Ordering a car usually takes from two to three days. In road transport, importers also do not need to worry about congestions and the risk of containers’ unavailability.

The freight price for December 2020 from China’s border regions and Kazakhstan to central Poland has increased and is close to 15,000/20,000 Euro. The road transport rates are higher than for rail transport but lower than for delivery by air. However, they are to decline as demand grows.

Due to the increase in prices and the extended waiting time, importers will change their transport preferences. For example, car companies will choose delivery by air instead of the sea to save time. Switching the means of transport will depend on the available space and freight rates. However, a drastic increase in prices may induce many importers to suspend their activities until their values stabilize.

What is also expected is the increase of demurrage fees, i.e., costs incurred for failure to pick up the container within a specified time. Delays at ports will result in delays in receiving goods, and thus an increase in demurrage fees.

Transport from China in 2021. How to deal with the changes?

Knowing what changes can be expected in transport in 2021, it is worth preparing for them properly. First and foremost, we recommend that you compare all the available options before initiating the import process. Please pay attention to the changing freight rates’ values to avoid overpaying for the delivery of your goods. If you have such an opportunity, move your deliveries to the turn of February and March, because then the prices are to fall.

To save money, it is also worth contacting several forwarders and comparing their offers. Let us find out what transport and insurance options they offer, whether they have their own warehouses, whether the forwarder provides palletization of goods, and whether they are customs agencies.

It is also essential to check available connections between China and Europe. For instance, in the case of railway transport, most of the connections come from central China. If your supplier is located in central China, you should consider this transport method as you will be less likely to experience delays. If you are interested in delivery by sea, you should ask your supplier from which port it will be best to ship your goods.

You should also consider transport to other ports or terminals outside the country. It is worth contacting your forwarder in this matter and ask if you will pay less for the delivery of cargo, e.g., to Hamburg, Rotterdam, or Antwerp. Carriage of goods to another port may also be a good option in the deficit of free containers or space on a ship.

Consider the transport of general cargo or delivery in other containers, e.g., 20’. It is possible to use two 20’ containers instead of one 40’HC container and ship them from different ports to different ports. This choice may also be the most beneficial for you. Let us give up FCL shipping and divide the goods delivery to LCL.

Additionally, we recommend that you check the Chinese holiday calendar carefully. It is worth planning your orders to avoid delays caused by public holidays. Knowing Chinese holidays will also make it easier for you to contact your supplier, so it is better to keep them in mind.