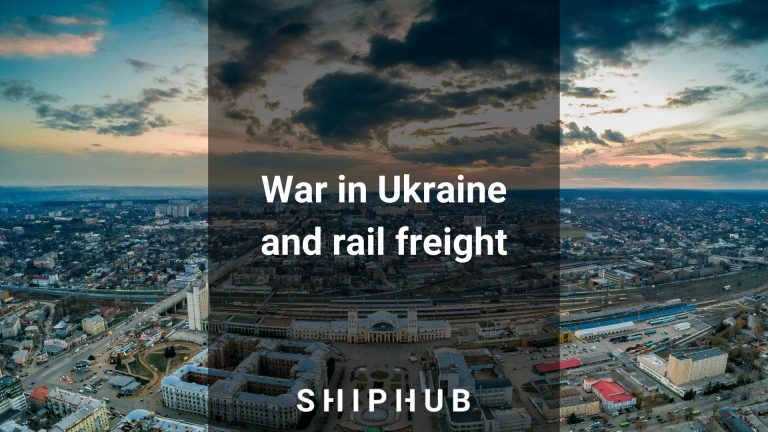 The recent armed conflict in Ukraine endangers the safety and life of many people, and its effects are felt outside the occupied territory. Without a doubt, the invasion has an impact on the New Silk Road rail freight. The war in Ukraine and rail freight – do freight trains run despite the circumstances?

There are two main corridors when it comes to China-EU rail freight: the East European Plain and Asia Minor. The East European Plain covers Belarus, Ukraine, and many other countries. The Russian invasion of Ukraine has created unrest throughout Central and East Europe. In terms of the New Silk Road Railway, the transportation corridor in Belarus, not Ukraine, plays a key role. It is estimated that in 2021, rail transit via Ukraine accounted for 2% of the westbound container traffic volumes on the New Silk Road.

In addition, at the end of 2021, the ban on transit traffic between Ukraine and Poland was introduced. It was lifted after about two months in February 2022, three weeks before the invasion.

War in Ukraine and rail freight

The operation of the transport network in the region is limited, and priority is given to military transport. The tracks connecting Russia with Ukraine were destroyed. Logistics operators such as Metrans, Rail Cargo Group, DB Cargo Eurasia, DB Schenker, HHLA, Neptune Logistics, and RTSB ensured that continuity of deliveries will be maintained despite the situation. Many companies redirected cargo to the main China-Europe corridor via Belarus. Some customers prefer their cargo not to be transited through the Russian Federation territory; therefore, they choose rail freight transport via Turkey or other means of transportation.

Russia is blocking the main Ukrainian seaports. Therefore, the country’s export products – mainly agricultural goods – have to find a new way out. Rail freight plays a significant role in continuing this export in the current situation.

What is the situation in Central Europe?

In 2020, 40 freight trains took the Poland-Ukraine-China route and back. The following year, there were already 124 trains. In 2022, the situation changed dramatically. Due to increased rail traffic from China to the EU via Belarus, the border crossing in Malaszewicze is congested more than usual.

China does not condemn Russia since the economic ties between those countries are strong. As long as the sanctions on Russia (and Belarus) do not target the right to transit, rail transportation between the EU and China through these countries will be possible.