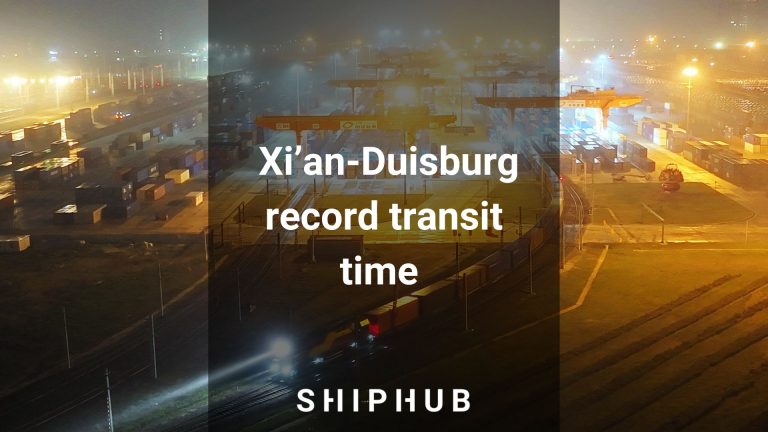 The New Silk Road is an ongoing project. The China-Europe transit time record has just been broken. The Xi’an-Duisburg train covered the distance in 10 days, while the standard transit time was two weeks.

The express service “Rail Link 2.0” has been launched as part of rail transport on the China-Europe network. The train dispatches from Xi’an, the capital of the Chinese province of Shaanxi, to Duisburg, a city in western Germany. On the way, the train passes:

Duisburg is an important hub for rail freight and maintains close relations with China. The volumes of rail freight traffic from China to Germany are the biggest. The destination is the Duisport terminal.

The first train (X8155 CR Express) of “Rail Link 2.0” covered a distance of 9,908 km in 9 days, 19 hours, and 26 minutes. The standard transit time is 12-14 days, but it has been shortened and became a fixed schedule. The delivery can be timely as long as all parties do their best and prioritize the journeys over other trains on the Asia-Europe route. There is a similar situation on the China-Kazakh border, where express China-Europe trains have priority over local trains.

In August 2022, the annual number of China-Europe freight trains was 10,000 (of which 3,500 departed from Xi’an), and by November, the number had grown to 14,000. Since the fixed schedule for the Xi’an-Duisburg freight train is a success, China Railway Container Transport Co. Ltd., responsible for the China-Europe routes, plans to launch more such services. As a result, rail freight transport will become even more competitive in the region. Previously, the transit time was estimated due to changing circumstances along the route and delayed administrative activities.

There are already ninety routes of the China-Europe Railway Express. Check out other train links between China and Germany, including Chongqing-Duisburg and Yiwu-Hamburg.