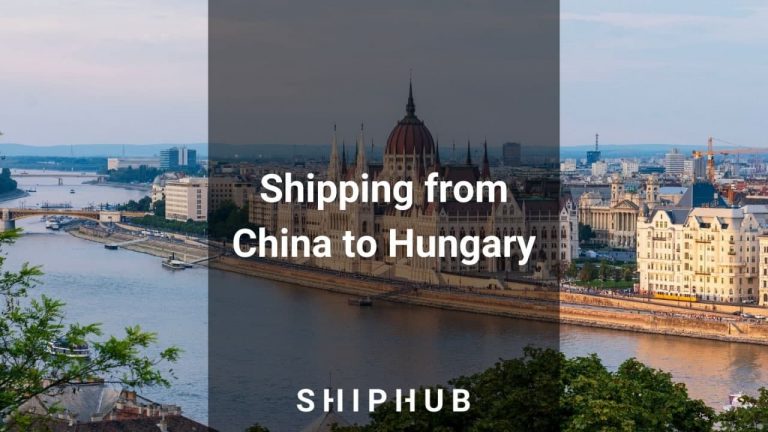 China is one of Hungary’s top trade partners, along with Germany, Poland, or Austria. Hungary’s import of Chinese products has been increasing since 2015. In 2020 it skyrocketed, reaching $8.72 billion. Importers from this country buy primarily electrical and electronic equipment, machinery, medical apparatus, and textiles from China. How to transport your goods between these two countries? We’re discussing shipping from China to Hungary.

Shipping from China to Hungary – Means of transport

Ocean freight is the cheapest method of shipping from China to Hungary. Due to its carrying capacity and relatively low price, it’s the most commonly used form of transport in international trade. When transporting goods by the ocean, one must choose between FCL and LCL transport. Therefore, it’s crucial to know their difference. FCL (Full Container Load) means that a container’s total capacity is used only by one importer/exporter. On the other hand, LCL (Less Container Load) means occupying only a part of a container and sharing the rest with other senders/recipients.

Please note that ocean freight’s advantages come at the expense of the longest transit time among all the means of transport. Thus, it’s not suitable for cargo with a short expiry date.

If your load must reach its destination as quickly as possible, airfreight is your way to go. There’s no faster or safer method of shipping other than air transport. However, at the same time, it’s the most costly one. That’s why it’s essential to consider all the crucial factors, such as your cargo’s specification or your budget, before making the final decision. Airfreight is most often used to transport valuable goods, e.g., vehicles or jewelry. It’s also the best way to deliver food, flowers, and pharmaceuticals.

Is there a rail link from China to Hungary?

The answer is yes; there is even more than one link from various Chinese cities to Hungary. Hungary was the second central and eastern European country after Poland, directly served by an express train from China. The first train that travelled between these two countries departed from Xi’an and arrived in Budapest in 19 days. With the current rail routes leading from China through Hungary, the country may become a hub for China-Europe freight trains.

Currently, such trains are delivering cargo to Hungary starting from Chinese cities, such as:

Railway transport between China and European countries has been gaining popularity lately. It’s mostly due to its price, which is much lower than airfreight’s, and its transit time – shorter than in ocean freight. Moreover, it enables shipping in containers. It’s definitely a worth considering option if you’re looking for an alternative to the means of transport mentioned above. However, not every type of cargo is allowed to be transported by train. Make sure to check the restrictions beforehand.

Due to Hungary’s localization, you may need to organize multimodal transport from China. Notice that the country is landlocked. There are many different routes you may choose from, leading through other countries and using various means of transportation. For example, your cargo may be delivered by sea from China to Szczecin in Poland through the German city of Hamburg. From there, it would continue its way to Budapest by road.

It can also be delivered by road to Hong Kong. Next, it would be shipped by sea freight to Hamburg and Budapest by road again. Furthermore, you could also incorporate rail transport into a route. There are many different possibilities. Therefore, take your time and consider various ways and methods.

Shipping cost from China to Hungary

Shipping costs depend on the cargo’s type and size, the way of transport, the chosen forwarder, and a few other factors. Before making the final decision, compare at least a few offers from different freight operators. You can easily do it on ShipHub. Just fill in the form on the official website, as shown in the picture below, and the available forwarders will send you their offers. Through ShipHub, you’ll quickly receive an in-depth quote on your shipment.

Visit the platform and plan your shipping from China to Hungary.

Shipping from China to Hungary – Summary