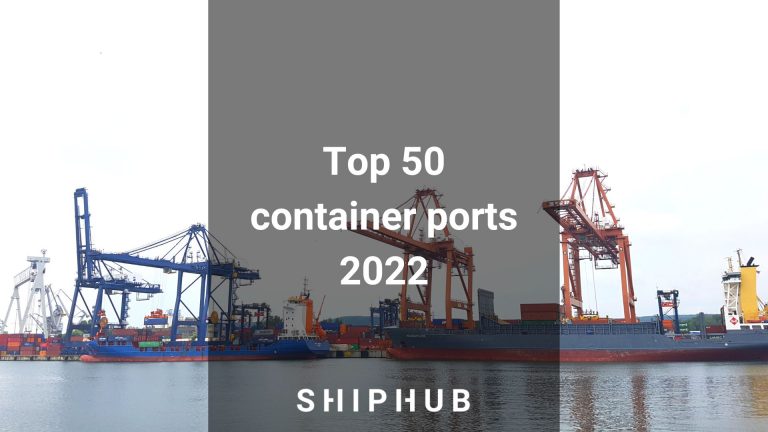 Every year, a new ranking of top seaports is issued. Port throughput can be measured by cargo tonnage, container TEU, and the number of vessel calls categorized by commodities carried. TEU is a standard measure used to measure container movements and the capacity of container ships. We have compiled a list of the top 50 seaports 2022 by TEU.

The port of Shanghai has been the busiest container port in the world for years. It was opened in 1842. Since 2017, the throughput of the port has been over 40 million TEU. The port mainly handles bulk shipments of metal ores, coal, petroleum and its derivatives, steel, machinery and construction equipment. It has both a deep-sea and a river port. The port of Shanghai handles ¼ of China’s foreign trade.

The port of Singapore lost first place in the ranking to Shanghai in 2019. It is the busiest container transshipment facility in the world, connecting 600 seaports in over 120 countries. The port’s terminals handle half of the world’s annual supply of crude oil, copper slag, steel, petroleum products, natural gas, cement, automobiles, machinery and more.

The port of Ningbo-Zhoushan, the oldest seaport in China, is located on the coast of the East China Sea in Zhejiang province on the southeast end of Hangzhou Bay. It has economic trade with over 590 ports from more than 100 countries and regions in the world. It is also China’s largest iron ore and crude oil transshipment base.

The port of Shenzhen is a collective term for Chinese ports located around parts of the coastline of Shenzhen, Guangdong province, 260 km in total. It consists of ports of Chiwan, Shekou, Yantian, Neihe, Shayuchong, Xiadong, Dongjiaotou, Da Chan Bay, Fuyong, and Mawan. It handles diverse cargo and container vessels of varying sizes.

The port of Guangzhou serves as an important economic and transport center for the Pearl River Delta region and Guangdong province. Nansha port area is responsible for 70% of maritime traffic of all ports in the port of Guangzhou. Port’s international maritime trade reaches over 300 ports in more than 80 countries and districts worldwide. Many industrial, agricultural and manufactured products are shipped through the port.

The port of Busan, established in 1876, lies at the mouth of the Nakdong River, the tip of the Korean peninsula. It is a crucial maritime gateway for South Korea. It handles containerized cargo such as meat, fertilizers, leather, metal, oils, iron ore, sugars, wood, natural sand, petroleum and coal.

The port of Tianjin (port of Tanggu) is a shipping center of North China and the maritime gateway to the Chinese capital. It has trade connections with over 600 ports across 190 countries and regions. It compromises coal and oil terminals and terminals handling dry and liquid bulk cargoes.

The port of Hong Kong is a natural deep-water seaport dominated by trade in containerized manufactured products. It is and has been an economic gateway to mainland China. For many years it was the biggest container port in the world.

10. NLRTM – Port of Rotterdam (the Netherlands)

Top container ports in the EU 2021